Mobile application for bodybuilders and trainers.
The LiftDay application is a workout journal and complete gym assistant, which helps to record physical exercises, analyze progress, and keep track of fitness and health.

Goal: To create an app that simplifies the process of logging physical activities, has easy to access logs, and provides an analysis of training progress.
Reasoning: There are no easy-to-use automated tools or apps on the market to track fitness. 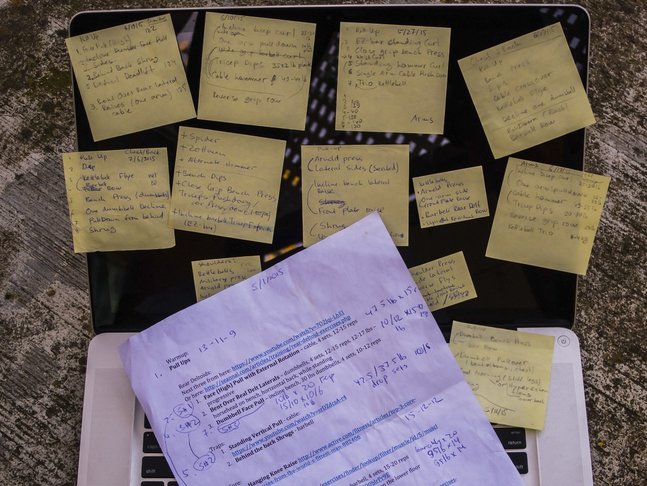 Ultimate goal: To build a platform, which includes mobile and desktop access to the user’s profile, and to create a unique hardware device, which will assist in weightlifting exercises (including recording data and sending notifications) without touching the mobile phone.

Before I started with brainstorming, I first performed the initial market and user research. I interviewed and surveyed bodybuilders and fitness enthusiasts. Below is the screenshot of the survey I ran to determine if people would be interested in this product:

Below is the screenshot of the survey I ran to determine if people will want this product at all:
Results from the survey were mixed. About half of those surveyed said they would not bring any smartphones to the gym floor.
Those who wanted to keep track of their workouts would want to use a specially designed proprietary and “smarter” device (one that would be able to make adjustments on the user’s behalf). Still, there was enough interest for us to decide to pursue this project.
The next step was to start brainstorming and sketching for branding, mobile app screens, and the core use-cases (which became Epics in our Scrum process). 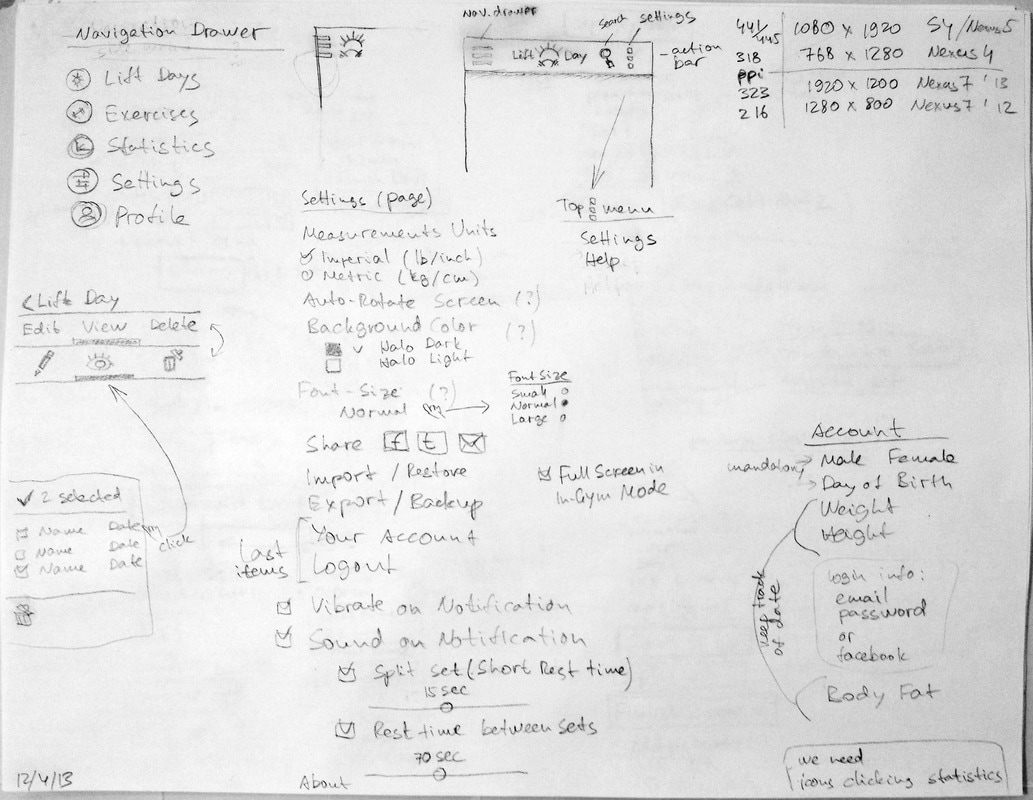 I also started to sketch possible designs for the physical gadget. 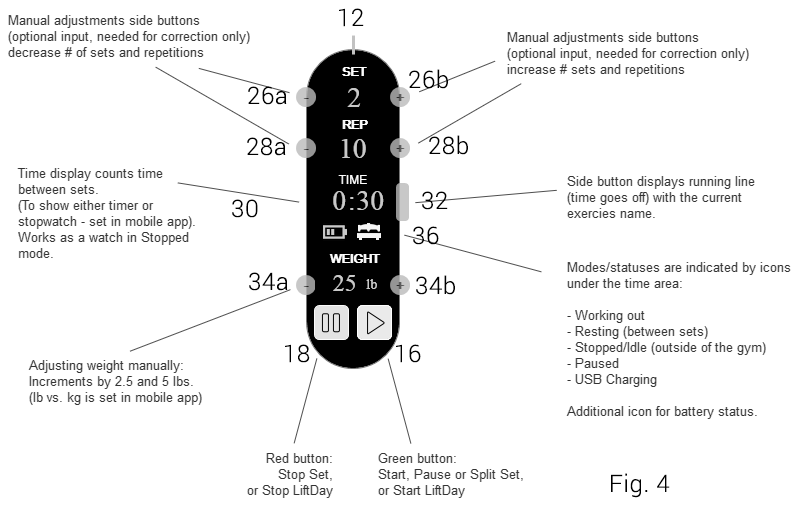 I outlined the system architecture: 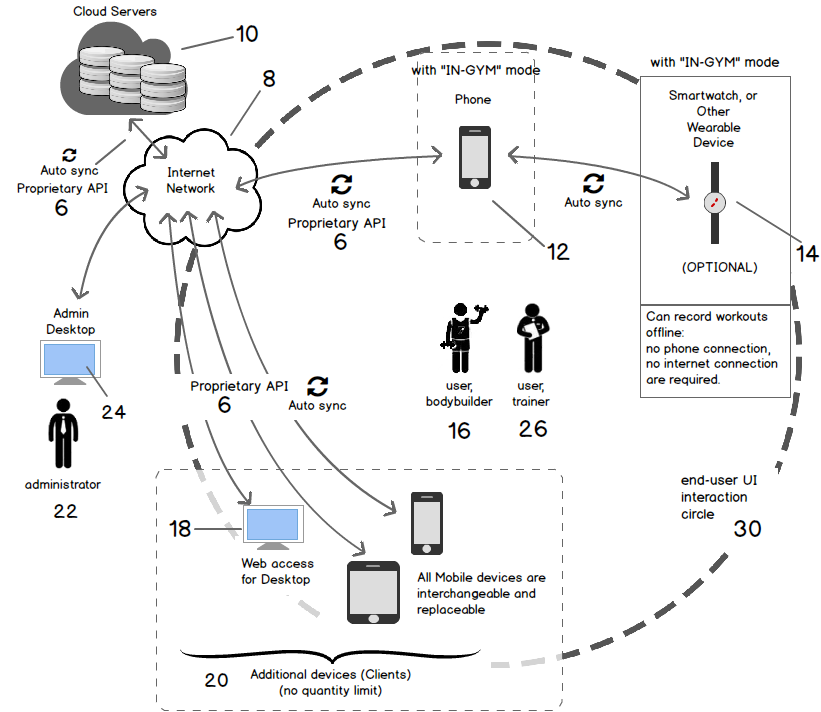 For the mobile app, I created and defined several use-cases and dozens of UI screens (Balsamiq Mockups). 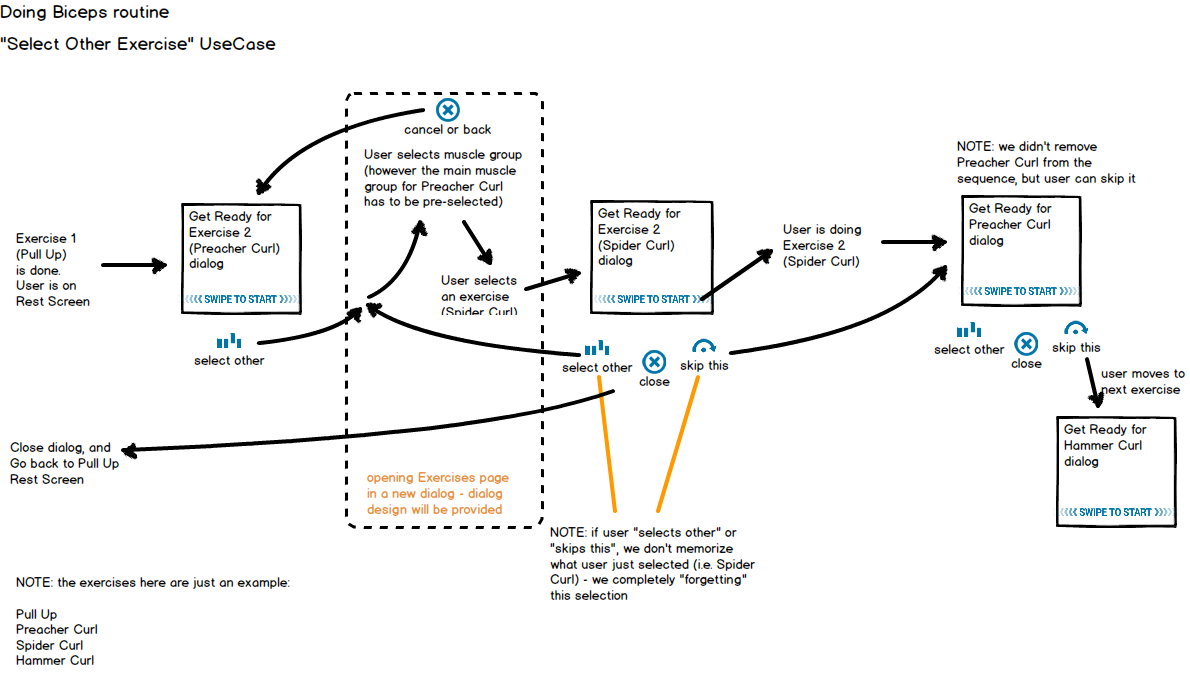 UI Design specs created in Adobe Photoshop (The color of the UI is determined by whether it is day or night): 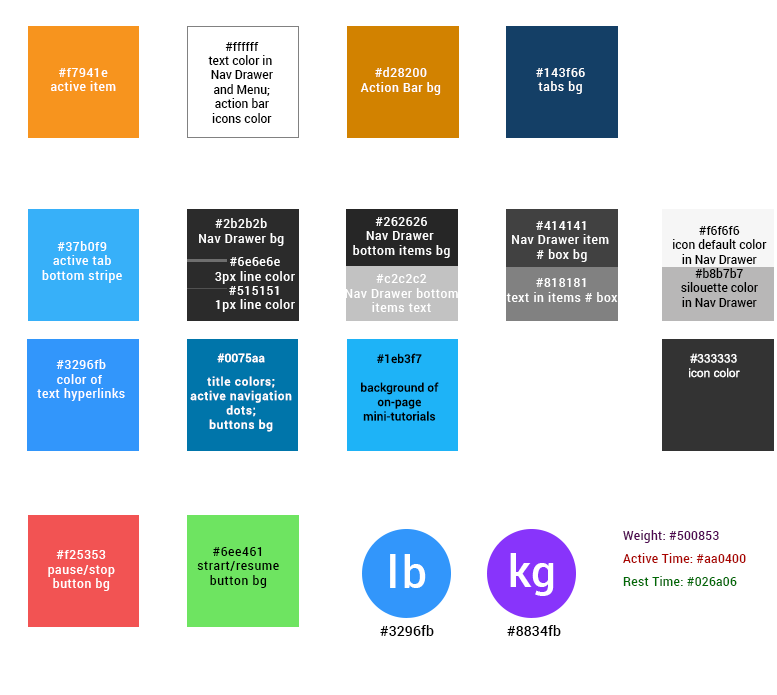 UI specs and interactions with developers.

Just the registration/login itself (Omnigraffle diagram): 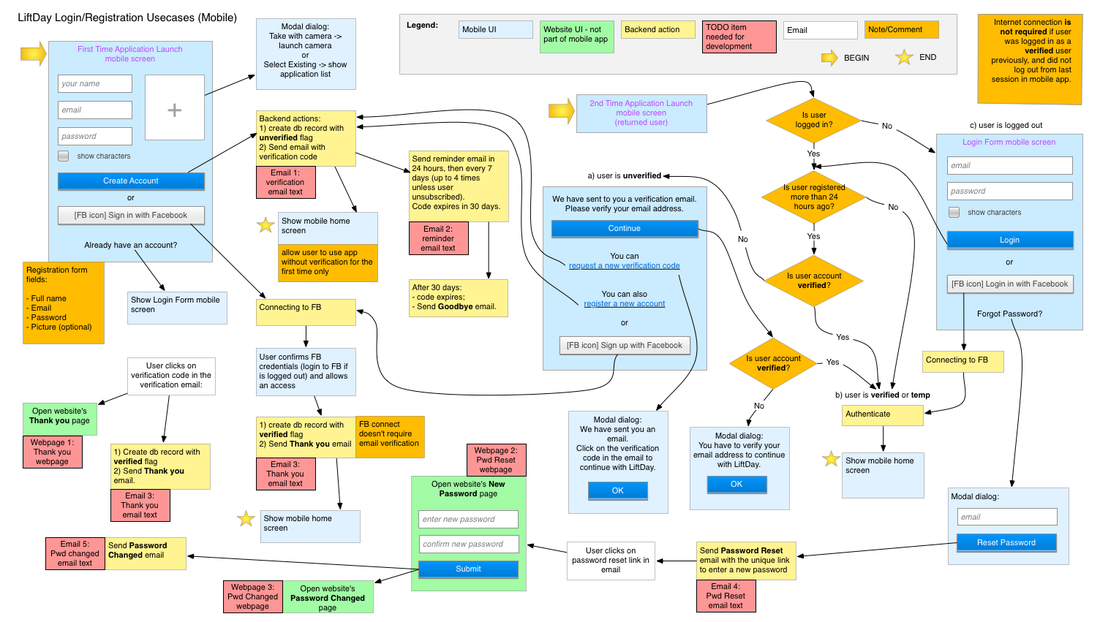 The app is fully translated into four languages:

I experimented with different icon designs:

We ultimately decided to use existing hardware: Android Wear. (These mockups are done in Omnigraffle.) 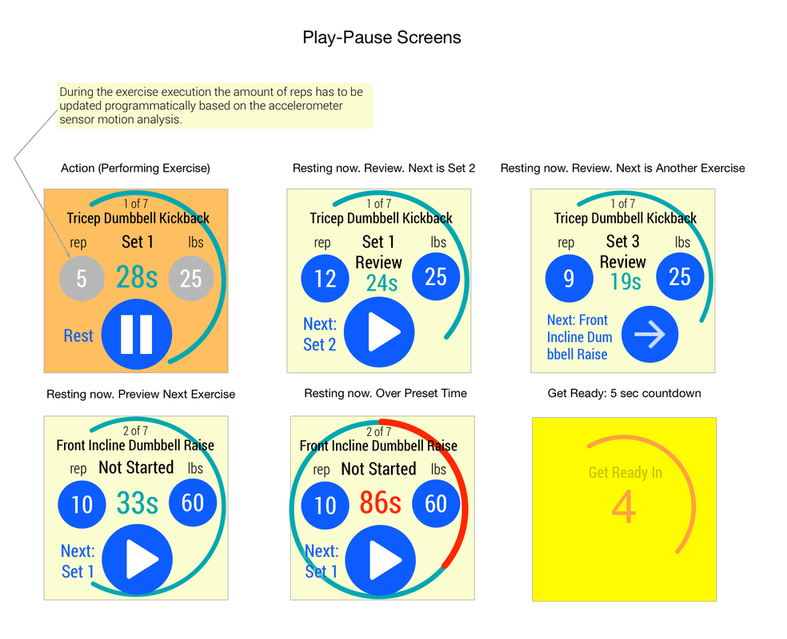 In addition to the design aspect of the project, I also directed the promo video, wrote the script, hired the models, and found the studio.

Here is the final app design. Screenshots are enhanced in Photoshop:

After release, I realized how easy to leave a negative feedback, which ultimately made the application disappear from all Google searches. Of course, I didn’t want our users to have a negative experience and I wanted more actionable feedback. That’s why I implemented the diagram below, which adds more control, and encourages users to write a private feedback about the problems they face. 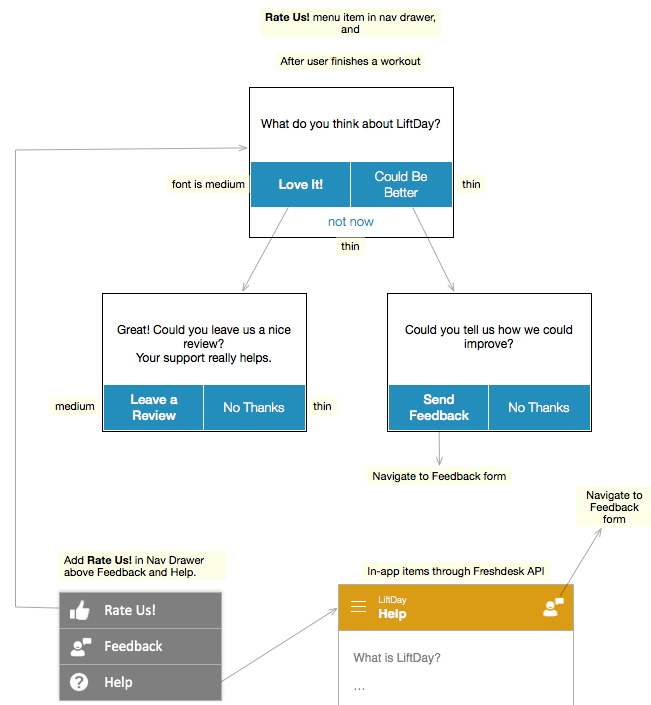 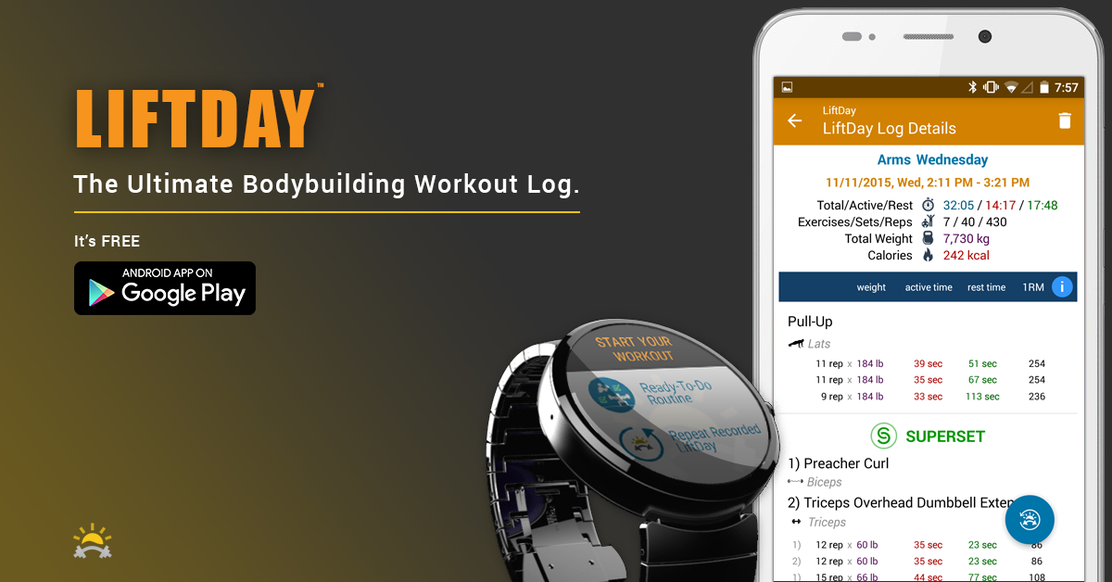 The app is out and currently has some users. It is not as active as I would like but I have some future goals for this project. Although the LiftDay Rest API has a recommendation engine, access rules, and a basic set of exercises, I want to build out the database of exercises to be more comprehensive. Also, I plan to build out the app for iPhone/IOS. Additionally, I want to finish the browser aspect of the webapp and build out our community more. Another future plan is to build the actual physical device. Let me know if you are interested in contributing to this project! Also, don’t forget to download the LiftDay app here: